Queen Victoria, daughter of the Duke of Kent (1767-1820) came to the throne of England at the age of eighteen (1837) and succeeded in restoring the image of the monarchy with her wisdom, gaining the respect of her subjects with her private life: an adored husband, Prince Albert, and nine children.

Her pattern of life was ruled by sobriety and hard work, in a word, by ” respectability”. As a consequence the Victorian Period was based more on exteriority than on spiritual values, on conformism and, often, on hypocrisy.

As to political and social life, lived a period full of changes and extensions in every field.

Queen died in 1902. Her son Edward came to the English throne trying to follow his mother’s steps.

The Parliament had to face the problems of the workers with a series of Acts ( The Factory Act, The Ten Hours’ Act; The Mines Act; The Public Health Act) to improve the working conditions, limit the hours of work and the exploitation of the children and women.

In 1884 the Third Reform Bill enlarged the suffrage to all male workers.

Under the reign of Queen , literature developed thanks to the improved ways of communication and a new printing system; it became a means to confute ideas and reveal thoughts.

This period can be divided into three stages:

Fiction: the writers identified themselves with their own age; they wrote long books published in serial instalments and structured every episode as a plot. They tried to attract the masses with suspense and the appeal to the sensational. Their motto was to make them (the readers) wait, cry and laugh.

Poetry: The poets at first followed the Romantic way of writing, but soon they reflected a sense of uneasiness. They developed the Dramatic Monologue in which a persona reveals his thoughts and feeling unconsciously to a silent listener.

Fiction: a sense of dissatisfaction and rebellion, caused by new scientific and philosophic theories (‘s Origin of the Species) pervades this period.

The realism of the works mirrors the clash between man and environment, illusion and reality, leading to Naturalism: man is no longer responsible for his actions since they are determined by forces beyond his control. The writer’s task is to record events objectively, without comments.

Poetry: The writers followed J. Ruskin’s theories (1819-1900) against the massification and the materialism of the society; The Pre-Raphelite Brotherhood proclaimed a return to simplicity and nature as an escape from this world, idealising and beautifying the reality.

Fiction: The writers searched for an escape “travelling” in their self and putting in evidence the contrasts between classes and races and the contradictions of colonialism.

Aestheticism brought to the extreme every attempt to escape from the real world supplying a way to avoid frustrations and uncertainties, reacting against Utilitarianism and moral restrictions, and breaking the social conventions by means of free imagination.

Main authors: R. L. Stevenson.(wrote about the duality of man); R. Kipling (dealt with the problem of colonialism) and O. Wilde (was the mouthpiece of Aestheticism)

Poetry: Aestheticism was fervent among the poets followers of the Rossettis, but the most original voice was the one of an isolated poet, G. M. Hopkins, who combined lyric passion with his true religious faith and used a musical and sensuous language, identifying matter and form.

Drama: The stage had suffered a long period of sterility due to the lack of new ideas and to the audience’s requests. The public, in fact, demanded amusing comedies, great effects and famous stars. The rebirth of the 1890s occurred thanks to the influence of French and Russian playwrights that focussed their attention on the psychological study of the characters, in particular, of women. From , instead, came the new form of drama written by H. Ibsen that analysed the social world and used the retrospective method. 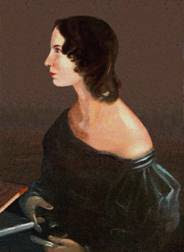 1818: Emily Brontë was born in Yorkshire. She was the fifth daughter of a country parson.

1820: the family goes to live in he parsonage of Haworth . Her mother dies after a year leaving six children and an aunt looks after them.

1824: She is sent to a school for clergymen’s daughters with her sisters, but two of them die and she comes back home with Charlotte.

Emily and Anne invent a kingdom called Gondal, Charlotte and her brother Branwell one called Angria. The inhabitants of these lands are characters of epic cycles.

1842: Emily goes to spend eight months with her sister Charlotte in Brussels to get a proficiency in French and become a teacher.

1846: Charlotte publishes a volume of poems written by herself together with her sisters. The book appears under the title of Poems, by Currer, Ellis and Acton Bell, pseudonyms, respectively, of Charlotte, Emily and Anne.

1848: Emily dies at the age of thirty. Her brother Patrick Branwell had already died few months before for alcoholism and tuberculosis.