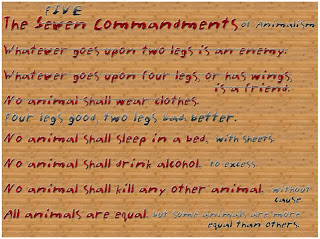 Old Major dies after 3 nights, but his speech is still in the animals’ minds.

They do not know when the rebellion can start but they want to prepare it. The pigs are the animals that can organize everything because they are very clever.

The most important pigs are Napoleon and Snowball. Napoleon has a good reputation; Snowball is very vivacious and inventive. A third pig who helps them is Squealer, a brilliant talker. They elaborate the principles of ANIMALISM and one night they are going to explain them to the other animals.

It is a difficult task: some animals say that Mr. Jones gives them food, others that the rebellion is not possible at the moment and Mollie is worried about her sugar and ribbons. Moses, Mr. Jones’s spy, is always speaking about a place in the sky for the animals after death, sugar-Candy Mou­ntain. He never works, but he is good at talking. The most obedient disciples are Clover and Boxer who never discuss the ideas of the pigs and always sing ‘Beasts of England’ at the end of the meetings….

…and the day of the Rebellion comes very soon.

Mr. Jones is very drunk. His men do not work hard and do not feed the animals. One Sunday, While Mr. Jones is sleeping and the animals are hungry, a cow breaks into the store-shed to have its food and the other animals follow it. Mr. Jones wakes up and starts beating them together with his men, but the animals’ revolt and they have to run away. Mrs. Jones picks up few objects and follows her husband together with Moses.

The animals are the winner: the farm has no master now. . After going around seeing if other human beings are still there, the animals start destroying everything belonging to man – tools, knives, whips, and chains- the objects man uses to beat the animals, and a great fire is made in the yard

The ribbons are considered symbols of slavery: animals have to be without the clothes man uses.

Napoleon gives everyone a double portion of corn and biscuits for the dogs. After singing Beasts of England seven times, they go to bed. The day after they wake up at dawn as usual. All together they visit every part of their farm, every field around it and at last they break into the Mr Jones’ louse. They walk quietly into the rooms because they are still afraid of him. 0nly Mollie is at easy in Mrs. Jones’s bedroom because there are some ribbons and she can look at herself in the mirror.

The animals decide to consider it a museum and to meet together for a discussion.

The pigs reveal they can read and write and Snowball writes on the top bar of the gate the new name of the farm: Animal Farm.

Then he writes The Seven Commandments that are a short summary of the ideas of Animalism:

1. Who walks on two legs is an enemy

2. Who has four legs and wings is a friend

3. Animals must not have clothes

4. Animals must not sleep in beds

5. Animals must not drink alcohol

6. Animals must not kill other animals

7. Animals are all l equal

Snowball reads them and some animals try to learn them.
Then they milk the cows and go to pick the hay
But when they come back the milk is no more there.