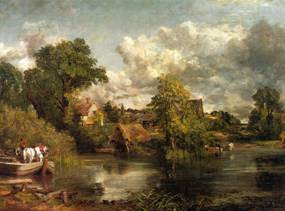 George III of Hannover reigned over Britain from 1760 to 1820. From 1811 his son George exercised the function of Prince Regent because of the king’s permanent insanity.

It was a period of great changes:
Inner policy: England underwent a radical change that transformed its economy from basically agricoltural to mainly industrial. This happened thanks to the technical inventions in the mining and textile fields and to the increased demand of goods due to the growth of the population.
Foreign policy:  In 1775 George Washington started a fight against the British troops in the American colonies. In 1776, July 4 the Declaration of Independence was issued in Philadelphia. In 1783 the British had to sign the treaty of Versailles that recognised the independence of the thirteen ex British colonies.
After 1793, with the end of the French revolution, the British army was engaged in the fight against Napoleon Bonaparte till 1815, when the French emperor was defeated in the battle of Waterloo.
In the course of the century England consolidated her power in India.

Fiction:
The XVIII century was dominated by the figure of Dr. Samuel Johnson (1709-1784). He wrote dramas, novels, issues, but, in particular, he became well known for his critical works and his Dictionary of the English Language (1775).
O. Goldsmith (1730-1774) and R. B. Sheridan (1751-1816) were famous for their prose writings and dramas.
Novel:   After The mouthpieces of the rise of the novel, D. Defoe, S. Richardson and H. Fielding, other writers approached the genre:
Poetry: Poets shifted their focus from reason to emotions and imaginations; they dealt with individual and nature, basing their form on more popular patterns and their language on common words for a larger public.
Jane Austen

1775: Jane Austen was born in Steventon, Hampshire, the seventh child of a rector. She remaines here for the first 26 years of her life. She studies at the Abbey School at Reading and then completes her education at home.. Soon she reveals her ability in writing.

1795: Jane starts writing her first novel, Elinor and Marianne, then revised and published in 1811 with the title Sense and Sensibility.

1796: The author writes First Impressions that will later develop into Pride and Prejudice published in 1813.

1798-9: To this period belongs the first draft of Susan, the future Northanger Abbey, that appeared in 1818, after her death.

1801-5: Her father retires and the family moves first to Bath, then, on his death, to Southampton. These years, spent far from Steventon, are probably unhappy because there is a pause in the writer’s activity.

1805: Jane moves with her mother and her beloved sister Cassandra to Chawton where she starts writing again surrounded by the love of her family and the devotions of readers like W. Scott and the Prince Regent.

1811-15: The author begins Mansfield Park; Pride and Prejudice appears; Emma is begun in 1814 and Persuasion is published the following year.

1817: the author goes to Winchester in search of medical attention, but she dies after three months. Her body is buried in Winchester Cathedral. 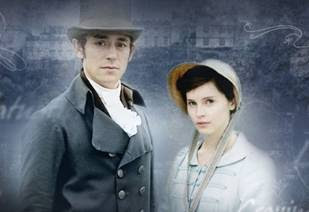 Summary
Northanger Abbey is the story of an ordinary girl, Catherine Morland, a clergyman’s daughter. She goes to spend some weeks in Bath with a middle aged couple, the Allens, friends of her family. There she meets the Thorpes and becomes close friend to Isabella, one of the daughters. At first Isabella gets engaged to Catherine’s brother while John Thorpe falls in love with the heroine of the novel. At a ball Catherine meets Henry Tilney and his sister, Eleanor. He is an intelligent young man attracted by the protagonist’s simplicity. His sister, kind and goodhearted, becomes Catherine’s bosom friend. Meanwhile Isabella Thorpe has revealed to be an opportunist, ready to break off her engagement when she meets a wealthier young man, Henry’s brother, Captain John Tilney..

Catherine falls in love with Henry and is invited by his father, Colonel Tilney, to spend some weeks at the family home, Northanger Abbey. The building is an old abbey and Catherine here dreams to live the experiences of her heroines, the protagonists of Mrs.Radcliff’s novels. But she is suddenly sent away by Colonel Tilney that has discovered, after speaking with John Thorpe, she is not the wealthy girl he hoped for his son. Catherine, hurt and disillusioned, returns home, but Henry understands he is sincerely in love with her and they finally get married.

Jane Austen’s great capacity for observation is the main source for her books: she sees everything as it is, as she has experienced. Most of the critics have underlined her ability in painting those scenes and figures she has herself seen, and which everyone can witness every day. Her hero and heroines make love and get married just as the readers do; “It is scarsely possible to read her novels, without meeting with some of one’s absurdities reflected back upon one’s conscience” (Anonimous, 1818; British Critic review) The sentiments which she puts in the mouth of her characters are the sentiments we feel everyday.. She keeps clear of all exageration. The only character in Northanger Abbey that speaks using a language rich in overstatements is Isabella. This fatuous, superficial girl was probably inspired by one of Jane Austen’s cousin, Eliza, daughter of an aunt on her father’s side. Eliza’s father was in India and the little girl lived with her mother and grew up in Steventon. Then they moved to Paris where she married, at twenty, the official Jean Capotte, Count of Feuillide. But just before the French Revolution Eliza came back to England in 1786, while she was waiting for a baby.
Characters

Catherine
She is presented as an anti-heroine: plump, pale, unable to draw and with a propension to male games. Jane Austen’s satire stresses the contrast between what Catherine would like to be according to the fashion of her time and what she really is, living in her imaginary world. Her visit to Bath and then to Northanger Abbey represent a sort of initiation: the innocent and amiable girl from Fullerton, Wiltshire, is opened to a different life in Bath; forgets her goodsense in Northanger Abbey to become a Gothic prima-donna and then, disillusioned, acquires a new naturaless. At the end of the story she is a young woman with a new capacity of judgement: life is not a Gothic novel and Isabella and Colonel Tilney have taught her a lesson for the future

Henry Tilney
He is a cunning young man that stresses with irony the contraddiction of the period. Henry is the Gothic hero reversed: he does not fall in love at once with Catherine, he does not rescue her. He gradually gets fond of Catherine appreciating her innocence, her purity and fragility. Henry is a man of the new middle class, witty and with common sense. Probably he mirrors the author’s thoughts about society and literature, enforcing every statement with ironical remarks.

Isabella Thorpe: Fatuous, malicious, self-confident and superficial, at the beginning she represents what Catherine would like to be. Then she disilludes her friend’s aspectative with the changes in her behaviourFor Isabella love is strictly connected with money and social position. Her feelings are only shown off if there is a counterpart to get. It is Isabella that introduces the theme of the Gothic novel as she considers herself an heroine.

John Thorpe: Like his sister, he is superficial and only concerned with horses. False and hypocrit, John speaks too much , unaware of the value of his words, and he causes, probably unwillingly, the apparent ruin of Catherine’s future life.

Mrs Allen and Mrs Thorpe: They are two women of the old generation, only devoted to dress and whose only care is how to make favourable and profitable acquaintances. In particular, Mrs. Allen is the target of Jane Austen’s satire against those women without personality and self-centred, representative of Bath’s society.Her deploration of the fact that Catherine has not been asked to dance, at the beginning of the novel, helps the author to define the Gothic convention that the hero and the heroine are mutually attracted by natural affinity, without the need of a formal introduction.

General Tilney:  Severe, proud of his social class, full of prejudices towards people socially inferior, he embodies the possible villain of a Gothic novel, but lacks the same depth and insight.
The writer seems to make fun of him: the man that makes the reader wonder about him at the beginnig, becomes a piece of amusement at the end of the book. The severe man of monomaniacal pride is submitted by a humble girl without “consequences”
Miss Tilney: Polite, kind and educated, she does not seem to belong to General Tilney’s family. She accepts Catherine’s friendship without questions. As a character she is frail and lacks inner introspection.

James Moreland: Catherine’s brother, kind and good-hearted like his sister, he becomes an easy prey for Isabella. His function in the novel is to put in evidence the eagerness and hypocrisy of Isabella Thorpe and the false behaviour and values that are the bases of the rising classes.

Captain Tilney:  Henry’s brother appears only few times during the story. Handome, elegant , he uses his charm to attract young girls that desire to reach fortune in their life. He is similar to his father as to villany, but his function is only to show Catherine the real nature of Isabella’s feelings.

Bath and the Tilneys’s mansion are the main places where the action takes place.
The former represents the old world that is going to disappear. Empty values and false behaviour, hypocrisy and fashion typicalof the old country gentry’s culture.
Northanger Abbey is the place where Catherine’s dreams of mystery and magic can become true, according to the Gothic readings that the protagonist starts loving influenced by Isabella. Both these places represent the steps Catherine has to take to become adult in a sort of buildung roman where the protagonist, at the end, acquires a new awareness, a new capacity of understanding and ability at judging people..
Commentary
The critics have underlined the most important features of Jane Austen’s art stressing her ironical style, her detached attitude, and the capacity of catching the comic aspects present in everyday events and people.
Her style is rich in contrasts (consider, for example the dialogues between Catherine and Isabella). She uses the omniscient unobtrusive narrator. Jane Austen, in fact, intrudes into the narration only when the topics shift from the story to comments and judgements about novels. The writer lets the reader form her/his opinion thanks to different points of view,
In this novel in particular Jane Austen has a precise target for her irony: the Gothic novel.
This genre was very fashionable in her times (second half of the XVIII century). Writers like H. Walpole (The castle of Otranto) and Mrs. Ann Radcliff (The Mysteries of Udolpho) wrote books based on misterious events, gloomy and secluded places. The heroines were young, beautiful, noble and frail ladies whose fate was to be at the mercy of wicked, unscrupolous villains.
The writer’s irony aims mainly at the melodramatic and pathetic aspects of the lives described in these novels and that obviously contrasts with the realism and the semplicity of her world.

1- Bath: It is a town in the South-West of England. It dates back to the 9th century B. C. and then was colonized by the Romans. It became famous before the end of the 1st century A.D. as a termae resort. Now it is a touristic place mainly known for the remains of an ancient temple devoted to Minerva and the famous termae of the Augustan Age.

2- Gothic Novel: The origin of the term Gothic is not very clear. A certain type of novel was called Gothic because the story usually concerned people and events of the Middle Ages (13th and 15th centuries). The main elements in these novels are monasteries, ruined churches, subterranean passages, hautnted castles; the themes are murders and mysteries. This form of fiction probably started in Germany.