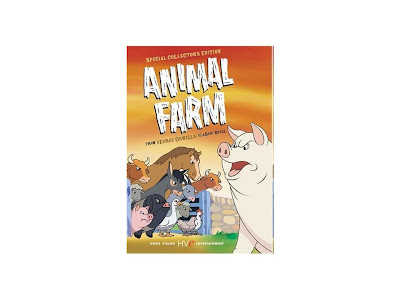 It is a bitter winter.

The animals work hard, but for themselves. So they work also on Sundays.

Nevertheless the harvest is not very good.

The windmill is a difficult work for the animals. The have the tools and the material, sand and cement, but they cannot break the stone.

At last they think to use the gravity force. But also the transport of the stone is difficult for them.

Only Boxer can pull the stones up the hill. He gets up earlier and earlier, working more and more. Clover is worried “Stop working so hard!” she tells Boxer, but his answer is always “I’ll work more!”

Even if they work so much. They have less food than before. Besides they need things they cannot produce: oil, strings, biscuits for the dogs, and iron for the shoes of the horses.

Napoleon declares the Animal Farm has to start trading with the other farms. The trade of wheat and eggs.

All the animals remember their decision not to trade with human beings any more. They are disappointed.

Some of them try to speak, but the dogs bark Napoleon says “I’ll make a sacrifice. I’ll speak to men. A solicitor will act as intermediary between Animal farm and the Human farms.”

When Napoleon finishes speaking, he starts singing Beats of England.

Then Squealer adds “We never stop trading with men. This is another Snowball’s lie1?

Every Monday the solicitor comes to visit the farm and the animals are afraid, but also proud. ‘Napoleon gives him orders’ they think. The other men, anyway, hope in a failure of Animal farm, but they are respecting the animals now.

It is just in this period that napoleon and the pigs go to live in the farmhouse.

Squealer says ‘There is nothing wrong about this. “

But the animals do not like the idea of the pigs sleeping in beds…like men.

Clover asks Muriel to read the Fourth Commandment once again.

She reads ‘Animals must not sleep in beds…with sheets.’

Clover does not remember this sentence, but Squealer says “A bed is only a place where to sleep…it is like a pile of straw. And we need rest. We work so much….and you don’t want Mr Jones to come back again, do you?”

In autumn the animals are tired, but happy. Napoleon sells a part of hay and corn. The windmill is going to be finished, thanks to Boxer who works also at night. Only Benjamin is not excited looking at the windmill….

Unfortunately he is right. In November a strong wind comes. It ruins the trees, the flagstaff, some roofs and the windmill.

The animals go to look at it in silence. In front of them there is Napoleon who says: “Snowball is responsible of this. I condemn him to death. I’ll give a prize to anyone who is able to take him.”

The animals are surprised, but Napoleon is able to discover some footprints of a pig and adds: “We must work to build the windmill again. Snowball must not be satisfied.”