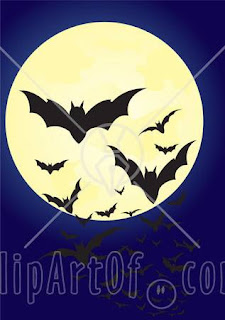 Darkson House
6. THE CURSE OF THE VAMPIRES

On the walk back to our homes I was feeling rather sorry that I had told Ron Rocco that we would visit Darkson House at midnight.
‘Do you think it’s such a good idea, Jodie?’

‘Well … it seemed like the right thing to say at the time. That Ron Rocco makes my blood boil the way he thinks girls are just wooses, scared of everything and only the big brave boys can do things.’

‘Yeah, that’s what got me. But I’m sorry I said it now. Our parents would never permit it.’
‘But how would we ever live it down if we had to admit we didn’t go?’

‘Rocco would laugh at us forever, even though he’s scared to death of vampires. You know Jodie, I don’t believe the vampire stuff anymore. It’s all ridiculous.’

‘The way everyone keeps exaggerating. They just like to make up stories to scare everyone.’

‘I don’t know. I suppose your mum will be working again tonight?’

‘Yes, from nine till two a.m. She hates working at night, but that way she says she’s home for me after school,’ I said.
‘So … I guess if you didn’t actually ask, you could just sneak out for say half an hour?’

‘And I expect I could tell my parents I was spending the night with you, which would be perfectly true. But what if your mother, or my parents came over and couldn’t find us?’

‘Oh that would be awful—they’d call the police.’

‘All right, we can leave a note saying exactly where we are going and that we’ll be back by say … twelve-thirty.’

‘Yeah, that way if anything went wrong, they could still find us.’ I thought it wouldn’t be so bad if we left a note.
‘What could go wrong?’

‘Oh let’s not even think about that.’

When we got home, we went straight into Jodie’s house and asked her mother would it be okay if Jodie spent the night with me.

‘Sure, no problem kids. Guess what?’

‘A man phoned about the car!’ Jodie’s mother sounded quite excited.

‘He’s coming tomorrow afternoon. He said the Falcon sounds like what he’s after. Dad’s going to take a few hours off work to show him the car.’

‘This sounds like we might be getting the pool soon.’ Jodie was smiling and making swimming motions with her arms.

‘Did you find any swimmers you liked?’

‘We sure did but they cost thirty dollars. Is that okay?’

‘If your Dad sells the car, we should be able to afford it.’

‘Mum, Karen has only ten dollars. Do you think Dad might give her some money for helping prepare the pool site, digging and things, and then if she helps to erect it?’

‘Well, you’d have to ask him. Maybe. If the man pays seven thousand two hundred, he will.’

‘Will he get the pool tomorrow if he sells the car?’

‘He wants to, but it will probably depend on whether the man pays with a cheque or cash.’

‘Yippee! It’s going to be so cool swimming. We can even have a swim at night sometimes, can’t we?’ Jodie was getting ready to plead.

‘Mum, do you remember Mrs Parsons?’

‘That’s her. She’s the housekeeper for the man who’s moved into Darkson House. Ron Rocco reckons she’s a witch and Mr O’Brien is a vampire.’

She sighed. ‘That Ron Rocco, he always had too much imagination and not enough sense.’

‘And now all the kids from school are going around saying things about vampires and bats and how Mrs Parsons talks with her cat and it answers back in German.’

Her mother smiled. We burst into giggles as we went into her bedroom.

In Jodie’s bedroom we gathered her books, pillow, clothes, and some pyjamas. We took them over to my place. The effort of doing this caused sweat to drip from our foreheads and arms. Although the windows were wide open there was no sea breeze and the air was humid and hot. In the hallway the thermometer showed thirty-seven degrees.
‘Mum, is it okay if Jodie spends the night with me?’

‘That’ll be nice for you. Jodie can stay here whenever she likes. Do you girls want some toast and milk?’

‘It’s too hot for toast, just some cold milk. Mrs Thomas thinks they might be selling the car and buying the pool tomorrow.’

‘That’ll be lovely. I bet you girls will never be out of the water.’

‘Sure thing. We can’t wait with this stifling heat.’

At five past eleven that night we were watching TV in my living room. Mum had already gone out and we were both feeling a little apprehensive about going to Darkson House. The closer it got to midnight the worse the idea sounded. The program ended and while we were just sitting there hardly bothering to watch, on came the next program: THE CURSE OF THE VAMPIRES. I sprang up and turned the TV off. ‘We can do without that tonight,’ I said.

‘I feel a bit nervous. It’s five-past eleven. I guess we should go about eleven forty. We don’t want to be late.’ She smiled.

‘Jodie, I don’t believe there will be any vampires or witches there but I still feel scared. We’ll be trespassing won’t we? Also we could fall over in the dark, or walk into a spider or something.’
‘Yeah. There are things to be careful of. Have you got a torch?’

But when we tried it the battery was half flat. I knew we’d have to conserve it till we got to Darkson House.

Twenty minutes before twelve we were both very nervous. We wore dark coloured clothes, so Mr O’Brien wouldn’t see us in the night. Putting on our bike helmets, we decided to keep them on the whole time. It would be safer if we tripped over in the darkness or a spider got on our heads.

We wheeled the bicycles quietly out through the gate. Inside the house we left the lights on. In Jodie’s place all the lights were out, everyone including her big brother Glen, asleep.

The roads were well lit by the street lights, and in fact it felt quite good speeding along in the cool night air.

As we rode past Ron Rocco’s house at the bottom of the hill, I quietly cursed him for getting us into this. Now he was snuggled in his bed sound asleep, while we were out trying to catch vampires in the dark. And just what would happen if by some weird turn of events we did see Mr O’Brien crawl out of a coffin like a vampire.

Oh, I didn’t want to think about that! I’d be out of there like I was going home on the last day of school.

As we came to the steep part of Kruger Street, it began to rain lightly. I could hardly believe it. The last thing we wanted was rain. The only good thing was that it would cool things off a bit for the next day.

We got off our bikes and wheeled them quietly up the hill till we reached Darkson House. Standing out the front of the house, our bikes parked in the gutter, we looked at each other wondering if there was any way we could get out of going inside.

Darkson House was lit up, almost every window in the house had a dim light showing through the joins in the curtains. Wind rustled the tree branches and leaves against each other, making weird rasping noises like an old man dying. I felt scared, but knew we’d come this far and the sooner we got it over with the better.