Darkson House…the mystery is not over 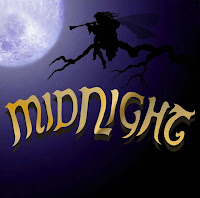 She nodded and turned the torch on. ‘Give me your hand and we’ll go side by side. That way we can’t get separated in the dark.’

It was awkward, but we went up to the heavy gate and with both of us pushing together we opened it. Apart from the weak torch beam we were surrounded by blackness. It was so dark that anyone or anything could be hiding behind the bushes waiting for us.

‘Leave it open,’ Jodie said. I knew what she meant—just in case we had to get out of there in a hurry. With hands clutched together we crept along the main path toward the front door. As we walked up the path, it got darker and darker, the trees obscuring the light from the street. The rain dripped off the leaves and made loud clicking noises as the drops hit our bike helmets. Just as we reached the front steps I saw a light go off upstairs.

‘Quickly, turn off the torch!’ I whispered. Was someone watching us from the upstairs window? We turned left and crept along the side path. It was more narrow than the main path and much more scary than in daylight. Jodie turned the weak torch on again. It seemed like there was a hideous creature hiding behind every bush. And even though I knew that was quite ridiculous it was hard to make myself believe it was safe. The torch was growing dim already, flickering off and on a bit. Oh, how I wished I had bought new batteries for it. The leaves dripped all around us. The house itself sat like a menacing monster, cold, dark and bewitching. Wet leaves brushed at our clothes, and branches scrapped our legs in the darkness. I could smell the wet, rotting leaves that had fallen onto the ground. But the worst fear I had all the time was that there was someone hiding in the shadows, someone watching us—waiting to pounce on us . . . some gruesome, zombie-like creature.

And then we walked into the spider web—right into our faces! I gave a little squeal and jumped back. So did Jodie. We frantically tried to wipe the spider web from our eyes, and in her fright Jodie dropped the torch and it went out. I was getting close to panic, but fought hard to control myself, for I knew if we panicked everything would get much worse. ‘I’ll get the torch,’ I said in my calmest voice to Jodie. But I was so afraid because I thought the spider was on me, running across my clothes. I found the torch and turned it back on. I shone it on Jodie looking for the spider, then on myself. It wasn’t on either of us. There was no sign of the spider. I whispered: ‘It must be still there.’ And I pointed to the remains of the web. I shone the torch around where the web had been. Yes, the web was damaged and hanging to one side was a large waiting spider, big as a CD.

‘Oh, what will we do?’ I was very frighted of spiders. I don’t know why. It was something that had worried me since I was a little girl.

‘It’s all right,’ Jodie said. ‘They don’t hurt you. I’ll go first.’ She shone the torch about looking for a branch. As she snapped off a small branch, it sent a shower of raindrops onto our helmets. She threw the branch forward and it dragged the web down and the spider hung to one side of the tunnel. Keeping the torch on it, we hurried past.

The path was more narrow now and we went in single file. Jodie with the torch was in front.

We came to the bougainvillaea “tunnel”. ‘Stop,’ I whispered. ‘Shine the torch down—yes. There is the statue of the girl.’ It lay on its back in the grass, just off the track, rain dripping onto its face.

We began creeping through the tunnel. We had to be careful of the razor-sharp thorns. ‘Go slowly,’ Jodie said. She swept the torch back and forth around the bush tunnel looking for more spiders. But as she moved forward a thorn caught her on the cheek and scratched her skin. ‘Oww!’

‘Let me see, Jodie. There’s a scratch, but it’ll be okay.’ A thin line of blood slowly oozed from along the scratch.

We continued along the tunnel until we came out into the open. We passed the upright statue, and then we could see the light from the basement window.

At that moment there was a huge flurry of flapping wings flying above us. We looked up, and against the cloud-obscured moon we saw hundreds of bats returning to their nests at the back of the house. I knew bats were actually quite helpful to people, because they ate mosquitoes and other insects. It was all those silly things that Rocco had said about them that sent shivers down my spine.

We sneaked quietly over to the window that had the curtains drawn back a little and crouched down panting and shivering. My teeth were actually chattering from fear; I couldn’t stop them for about a minute.

Jodie turned the torch off whispering to me: ‘I’ve got to save it, so we can see when we go back through the tunnel.’ Just at that moment we heard the most blood-curdling sound possible. It sounded exactly like a vampire rising from the grave, except that I didn’t really believe in vampires. Or did I?

Jodie clutched my arm tightly. ‘What was that?’ I could feel her hand trembling. And the noise repeated, even louder this time. It was coming from close by, above our heads, and echoed all around us.

‘It’s okay, Jodie. I think it’s a possum; that’s the noise they make.’

I almost smiled. ‘Yep. I’ve heard them before, they sound horrible.’

‘Someone’s creeping down the tunnel! Turn the torch off,’ she whispered. We pressed ourselves close to the ground, alongside Darkson House, absolutely terrified, and waited with our hearts thumping like thunder.