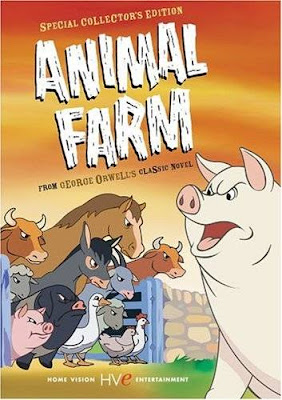 The winter is long and stormy, with snow and frost.

Nevertheless the animals work to build the windmill: they want the man to be envious of their farm.

On the contrary, the men think ‘The windmill is not resistant because the walls are too thin.’

The animals do not agree with this opinion, but they decide to build thicker walls. Now they

Feel less optimist: they are cold and hungry.

In January the ration of corn becomes smaller and the potatoes get frozen in the field.

But the animals do not want men to know, so they put sand into the barn and cover it with grain.

Mr. Whimper, the solicitor, sees them and tells the men that Animal Farm has plenty of food.

However, towards the end of January, the animals need more grain. One Sunday morning Napoleon appears with great ceremony and announces: “the hens must give me their eggs. I must sell them. I need one hundred a week. With the money I can buy grain.”

The hens start crying and protesting. There is a sort of rebellion and the hens break their eggs on the floor.

Napoleon orders “You will not have your ration of food until you give up!”

Nine hens die, but the pigs say their diagnosis: “It is coccidiosis!”

After Snowball’ escape, nobody remember him in the farm, but he is again accused of everything wrong in the farm. And Napoleon is always smiling around with his dogs.

One evening Sqealer calls all the animals together and starts speaking: “Comrades. Snowball is now with Frederick of Pinchfield Farm and he is planning to attack us. I want to tell you the truth: we know that he is Jones’s secret agent!”

The animals are surprised: they remember Snowball as their leader in the Battle of Cowshed!

“Do you remember his escape during the battle and Napoleon courage against Mr Jones? These documents reveal everything, but, unfortunately, you can’t read….”

Few days later Napoleon appears in front of the animals: he has two medals on his breast. His dogs attack two pigs and Boxer who tries to defend himself. Napoleon orders the pigs. “Confess your crimes! You don’t want to work on Sundays. You are snowball’s agents!” and the pigs confess.

The same happens with four hens, a duck and some sheep. All of them are killed.

The animals are now silent, only Boxer finally says: I don’t understand. There is something wrong. But I’ll work harder!”

Clover’s eyes are full of tears. She remembers different ideas and words at the beginning of the revolution and starts singing Beasts of England! The other animals follow her. But their tone is sad and slow

Then Squealer arrives and says: “We need no more to sing. This is the song of the rebellion, but now we are free, the enemies are defeated. The society of our dreams now exists!”

Instead, Minimums, the pig poet, starts singing another song “Animal farm, Animal Farm, never through me shall come to harm”

It is completely different.