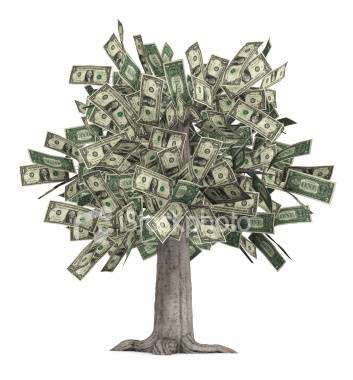 Jodie’s mother was explaining to us while we sat on the hard bench in the police station. ‘Counterfeit money is money that has not been made by the government mint. It’s money that someone has made themselves. Years ago people used to make it with a printing press, but these days people sometimes try to use a photocopier. The banks can usually see that it’s counterfeit straight away. It’s very hard to get the same paper as real money, which has a thin metal strip inside the paper. If you hold it up to the light, you can see it. You just can’t buy that paper.’

‘So it’s illegal to make your own money?’

‘Of course! It’s a serious offence in every country. In the old Soviet Union you could have been executed for making counterfeit money. In Australia you might get ten years imprisonment.’ And then she started sniffing.

I didn’t know what to say. I was sure Mr Thomas wasn’t dishonest.

‘Everyone knows, Karen. If everyone started making their own money, all the money would soon become worthless. The whole country would—there’s the solicitor!’

She stood up. ‘You girls wait right here.’ We sat on the hard bench in the police station waiting for the solicitor to get bail for Jodie’s dad. Mrs Thomas went across to talk to the solicitor. He was dressed in an elegant double-breasted suit. He talked to her for about five minutes while we watched the other people coming and going at the police station.

We saw, through the glass windows, a police car pull up out the front. Two policemen got out and then tried to get a short, fat man in overalls from the back of the police van. He half fell onto the ground, the police dragged him to his feet and began to lead him into the police station.

Next thing the doors flew open like a truck had smashed through and in came Charlie Graves, staggering drunk. Most people in our town knew Charlie. He wasn’t a bad man, but always in trouble with the police for being drunk.

‘I know the bloody way! You think I haven’t been here before?’ And with the two policemen trying to hold him back, he dragged them at a jogging pace down toward “his” cell. ‘Hey, someone’s in my cell! Get outa there! Open this cell door and let me in, I need a sleep.’

The solicitor was now talking to the desk policeman. Then before long the policeman went off. I heard Charlie Graves yelling out: ‘And don’t sit in my cell again!’

Next thing Mr Thomas walked around the corner. He looked ten years older than when I had last seen him at Swimming Pool World. His face was grey, his shirt dirty, shoulders hunched over with lines around his eyes. He talked to the solicitor, then the desk policeman. They talked and talked, then they all started writing on pieces of paper.

Mr Thomas came over to us. ‘Hi, let’s go home.’ We all walked outside and got into Mrs Thomas’s Commodore.

‘Still down at Swimming Pool World. We’re going down now to pick it up.’

‘Are you free? Did they realize they made a mistake and you are innocent?’

Mrs Thomas answered for him. ‘No, your dad was granted bail of two thousand dollars. That means we have to give them two thousand dollars until he appears in court, then we get the money back. But if he doesn’t appear in court next week, we lose all the money and then they send the police out to arrest him. Oh dear, oh dear—I can’t … David, how did all this happen?’

‘I’ll explain everything when I get home and you make me a cup of tea.’ We all climbed into Mrs Thomas’s car, and drove back to the car park where the lonely Volvo sat by itself in the dark. Through the wire fence I could see all the swimming pools. I felt sad, and wondered if they would ever actually get one now. Jodie said sadly: ‘Bye, bye swimming pool.’

Mr Thomas stepped out, went over to his Volvo, got in and drove off. We followed in Mrs Thomas’ Commodore.

Sitting in the living room. Mr Thomas looked more normal, but still upset. Mum was there too, but she didn’t say much.

‘I’ll tell you all exactly what happened.’ He took a sip of tea. ‘Mr Swift decided he wanted to buy the car. He was very nice—a man about my age who needed a car for his wife. We agreed on a price of seven thousand one hundred dollars. I asked him could he pay me in cash, because I wanted to buy a swimming pool before the shops closed.

‘If he had given me a cheque we would have had to wait a week before it was all cleared. Besides sometimes a person will write a cheque when they don’t have any money in their account. I remember he said: “Certainly, I’ll get you cash. I don’t believe in all these cheques and plastic card nonsense. The only thing that counts is real money.”

‘So I asked him where his bank was. He told me it was the one in Farren Street. We drove down there and went into the bank. I walked over to the counter and stood right alongside of him and watched him fill out a withdrawal form for seven thousand one hundred dollars. I stood at the back while he waited on the queue to be served. He went up to the teller, passed him the form, then the teller gave him a stack of new one hundred dollar notes. Mr Swift walked back to me and handed me the money. He only had it in his hand for about five seconds while he carried it from the teller to me. I watched him all the way. I counted the money and put it into my wallet. We walked to the car, drove back here and I gave him the keys to the Falcon, all the paperwork, and then he got in and drove away.’
Mrs Thomas said: ‘So it was actually the bank that gave out the counterfeit money?’

‘Yes of course! Nothing to do with Mr Swift. I went straight down to Swimming Pool World. I talked to both the girls, and told them to go home and change while I bought the pool. Well I went inside, told them what I wanted and paid the money in new one hundred dollar notes. The salesman went off, when he came back he started umming and ahhing and saying it would take thirty minutes to unload the swimming pool from the back room. So I waited. I found out later that they became suspicious of the money because it looked new, so they took the money to a bank to have it checked. The bank checked it under a microscope or something and then called the police. I was still standing in Swimming Pool World when they arrested me.’

Mr Thomas took another sip of tea and continued. ‘I couldn’t believe it. I knew someone had made a dreadful mistake. I told the police that the bank had just given me the money. They phoned the bank, but the bank said that no one had withdrawn seven thousand one hundred dollars that day. I argued about it, but they started getting angry, and eventually they charged me with attempting to pass and being in possession of counterfeit money—or something to that effect.’
‘And you have to go to court next Monday?’

‘Yes. That’s when the police will present their evidence that I broke the law. It’s a preliminary trial. If the magistrate thinks there’s enough evidence against me, I’ll be committed to trial, and if I’m found guilty—‘ he swallowed, ‘it’ll be prison for me.’

‘Sure, and the lawyer will get me off and then I’ll only have to pay the lawyer ten thousand dollars and I’ve lost all the seven thousand one hundred dollars from selling the car because the police are keeping it since it’s worthless counterfeit money. And so we’ll end up about seventeen thousand dollars out of pocket, and you can all forget about getting a pool for about five years!’
‘Dad, you think someone at the bank deliberately gave you the counterfeit money?’

‘Of course! They have made the money themselves, or with the help of a printer and then swapped the counterfeit money for real money. I just happened to be the one who went in and collected it.’

‘Maybe someone else had just paid the money into the bank.’

‘Could be—but it was up to the bank to discover it then, not wait till they gave it out to the next customer. But I believe someone at the bank was responsible for the counterfeiting. You know why?’

‘Because if a customer brought the money in,’ my Mum said, ‘the teller would have noticed.’ ‘Good, but more than that. No one else would have had such a good chance to substitute the money. It had to be someone at the bank. And I intend to find out who that person