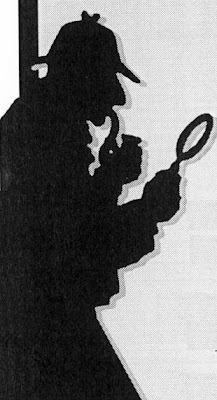 Tuesday morning I didn’t get up till five past nine. The only reason I got out of bed was to have a cool shower, for it was already about thirty degrees, and very humid. When I went in for breakfast, Mum was eating.

Jodie turned up about eleven, looking miserable. It was bad enough that her dad was in all this trouble with the police, but on top of that she didn’t look like getting a swimming pool now for years. Meanwhile we sweltered through a heatwave during the December holidays with summer hardly started. It looked like being a depressing Christmas.

We sprawled over the floor in my bedroom feeling more and more miserable. At last I said: ‘Hey Jodie, we’ve got to do something. This lying around feeling miserable because of what happened is useless. We need to try and solve this mystery, just like we solved the vampire mystery at Darkson House.’

‘Oh sure—everything is easy when you know the answer. It wasn’t so easy before. It’s like a crossword puzzle. You spend hours trying to figure out one word and can’t, then someone tells you and it’s so easy you wonder why you couldn’t think of it.’

‘Yes, but solving this could be dangerous. If someone at the bank is making counterfeit money, they’re going to be careful about what they say. And if we start to find out the truth, they could get violent.’

‘Sure, but we don’t have to tell everyone what we are doing. Besides what else are we going to do this holiday now we haven’t got a pool? If we found the counterfeiter, we might even have a chance of getting your father’s seven thousand one hundred dollars back.’

‘Yeah, I expect you’re right. Hey, you know we should try and figure out who it was at the bank because then we can tell the police and then Dad wouldn’t have to hire a lawyer or go to court. That’s worrying me. Dad said that if he goes to court next Monday morning then he will have to sell Mum’s car to pay for the lawyer. That means Mum has no car, and that means I have to walk or ride my bike everywhere even if it’s forty degrees or raining frogs and toads.’

‘All right,’ I said, ‘we agree to look for the counterfeiter—but how?’

‘Let’s just sit and think for about ten minutes. You do it your way. And I’ll do it my way.’

‘You mean you want me to use intuition and you will use logic?’

Jodie was smiling at me. ‘It’s worked before.’

We sat in silence for about ten minutes. I had my eyes closed. First I thought about the counterfeit money and how I wanted to know who made it, then I tried to clear my mind of all thoughts—and imagine I was looking at a blank sheet of paper. A lot of thoughts drifted through my mind. I knew these ones weren’t the answer. I saw pictures of the police station, of the swimming pool, Ron Rocco, Darkson House, and finally the blank sheet of paper in my mind had a white light shining on it, then nothing.

I opened my eyes disappointed. I looked out the window at the pale blue sky; the green tree tops were waving slightly with the gentle breeze. I waited for Jodie to speak. ‘Ten minutes are up,’ she said. ‘Did you get any ideas?’

‘Lots of things came to my mind; it was hard to keep it clear. There was the swimming pool, and the police station, and Darkson House, and a white light on a piece of paper. None of that seems to help much. I guess it’s just thoughts left over from yesterday.’

Jodie agreed. ‘Yeah, it’s hard to stop thinking about Darkson House and the vampires, even though it’s all over. I came up with a couple of ideas. The most important is that the bank was the source of the counterfeit money, so I think we should go back there to start our investigation.’
‘That makes sense,’ I agreed. ‘But what can we actually do at the bank?’

She got up and walked around the room a few times. ‘Why don’t we go in and enquire about opening new accounts? We can look carefully at all the tellers, and see if anyone looks suspicious.’
‘How can we tell if someone looks suspicious?’

‘Hmm. Good point. We’ll go and look anyway. It’s a starting point and we may learn something.’

At the bank we took all the free forms we could find about cheque accounts, Bankcard, tax file numbers, and special accounts earning high interest. But all the time we walked about peering at the tellers and the people working at their desks. We were looking for someone suspicious. Sometimes I thought everyone looked suspicious, then I looked again and they looked innocent. There was one man, about twenty-five who Jodie thought looked suspicious. He had an earring and a tie, and kept looking about him nervously as though he was expecting a hold-up at any minute. We read his name plate: Henry Horton.

Eventually we went over to the enquiries counter. A woman teller came over straight away.

‘We’d like to find out about opening savings accounts.’

‘Certainly. I’ll get some brochures.’ She went off a moment and spoke to a man standing at an office doorway. As she spoke, he looked directly at us, as if she was telling him about us. Then when she came back she took the brochures from under the counter where they were all the time.

Jodie seized one leaflet and started turning the pages. ‘Hey Wow! Let’s put our money in this one Karen—it pays 21 per cent interest!’

The woman looked puzzled, then said: ‘Oh no—that’s CreditCard, that’s the interest you have to pay.’
‘Oh. Well, how much can I get on my savings account?’

‘This one pays four percent as long as you keep more than five hundred dollars in it. And it has very small charges. ‘

But Jodie wasn’t really listening, she was thinking up questions. When the woman finished explaining, Jodie looked at her calmly and asked: ‘Do you ever get counterfeit money in here?’
‘What?’

‘Do you ever accidentally give people counterfeit money? Because I heard about this man who got some money out of a bank, probably not this one, and it turned out to be counterfeit and then the police confiscated it.’

‘We have never given out counterfeit money. Never! We would notice it immediately.’

‘It has never happened here I can assure you.’

‘Hmm. Okay, we’ll just take these leaflets home and check them out.’ Jodie picked up all the bits of paper telling her how they could save her money, and we headed for the door. But just as we reached the exit a guard, dressed up like a policeman, appeared in front of us blocking our way.

‘Stop please! Would you girls come with me. The bank manager would like to have a word with you.’
‘Us? But why?’

‘I don’t know—he’ll tell you. Come with me.’ He led us, through a side door, which he unlocked with a key—then past all the desks with people adding up numbers, sitting in front of computers, talking on telephones—and into a very smart looking office.

‘Hullo. I’m Mr Buller, I happened to overhear your conversation at the desk. Could I have your names?’ It was the same man the teller spoke to.

‘Wrong? Counterfeit money is what’s wrong! Karen would you wait outside the door for a few moments. I think what I have to discuss with Jodie concerns her father and is private.’

But I didn’t move. I was wondering what I should do. Then the guard standing behind me touched my arm lightly to lead me away. I shook his hand free. ‘No. I’m staying with Jodie. If something concerns her, then it concerns me.’ I stared right into his eyes. I had no intention of leaving Jodie if she was in trouble.

The manager looked annoyed, as if I was another troublesome teenager, but then he shrugged. ‘As you wish. I heard you asking questions about counterfeit money,’ he was looking at Jodie.

‘Yes, we were curious if it had ever happened before.’

‘So that was the real reason you came here—to snoop?’

‘No—just to … investigate. I have a right to do that my father—‘

‘Your father has made slanderous accusations against this bank. If he continues to do so, he will find himself in court being sued! Accusing us of passing him counterfeit money is very serious. It could cause everyone in this town to panic and draw all their money out of our bank. Do you understand just how serious that is?’
‘But my father is in a lot of trouble because of your bank!’

He stood up suddenly, speaking in a loud voice. ‘My bank did not give your father counterfeit money!’
‘Well how else did he get it?’

‘Your father does not even have an account here, so how could we have given him counterfeit money?’

‘Your bank gave it to the other man, Mr Swift, who then handed it to my father.’

‘Nonsense. Our bank would never make such a mistake.’

‘Could we see if your bank gave seven thousand one hundred dollars to someone at about five past four last Friday?’

He sat down exasperated. ‘Of course not! Our bank cannot, and will not divulge information about another customer. That information is absolutely private.’
‘How do you know there isn’t a counterfeiter working in your bank? Someone who—‘

He stood up suddenly knocking pens and papers onto the floor. His face was turning quite red, he pressed a button on the desk. The door behind us opened immediately and the guard stood there. ‘Take them outside quickly—before I lose my temper. You girls should let the police force carry out the investigation, and not act like amateur detectives!’

The guard took my arm, but I turned quickly and pushed past him. Jodie did the same. We were both annoyed. The bank manager wouldn’t even help us. He just wouldn’t believe that anyone in his bank could possibly give out counterfeit money.

We got out onto the street and walked away without saying anything for a whole minute. Then Jodie said: ‘Maybe the manager knows who the counterfeiter is and he’s protecting him.’