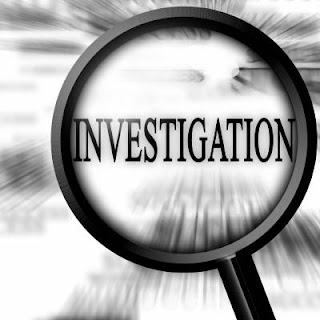 The next morning after breakfast I went to ask Jodie if she would like to go for a swim at the beach. The weather was still hot and sticky.

In the driveway Mr Thomas was cleaning the windscreen of his Volvo. Jodie was sitting in his car, the engine running, with the air-conditioning blowing cool air onto her face.
‘Ah, heaven!’

Mr Thomas looked frazzled. When he finished the windscreen, he started searching through the glove box for the maps. ‘Jodie please get out of the car. I’ve got to find my maps of Port Macquarie.’
‘Port Macquarie! Are you going to Port Macquarie?’

‘Yes of course I am. I just had a phone call from a used car yard in Port Macquarie and they said that I sold them my Falcon yesterday afternoon. Ridiculous! It wasn’t me, so it must have been Mr Swift. I can’t understand it. I’ll have to talk to the people at the car yard and find out his address. He’s the only person who can verify that the bank gave out the counterfeit money.’

‘But the address he gave me is no good—he must have moved recently. The car yard will help me find him. Sometimes you’ve got to do things in person. Letters and phone calls take too long, don’t forget I only have until Monday morning to solve this counterfeit business. That’s only three days! I’ve just got to solve this muddle by then or I’m in all sorts of trouble. There’s lawyers and I’ve got to have time off work to appear in court, and then I could be committed to trial … oh I’d have to start selling the furniture!’
‘So you are going to go to Port Macquarie to get Mr Swift’s address from the car yard?’

‘That’s right! He can tell the police exactly what happened at the bank. He might even remember which teller it was. I’ve also got to find out why he bought my car and then sold it again the next day. That doesn’t make sense. I’d better get going.’

He got into the driver’s seat, a frown on his face, and began backing out the driveway. Jodie called out, ‘Hey! Can we come with you?’

‘What?’ He stuck his head out the window.

‘Could Karen and I come to Port Macquarie with you?’

‘Certainly not—you’ve got school and—‘

‘Dad it’s Christmas holidays, and the car is air-conditioned, and we could keep you amused and …’

‘No, of course you can’t. I’ve got things to do that—that are private.’

He drove off, winding the window up as he went.

‘He’s getting really worked up now about all the money a trial would cost.’

We went into Jodie’s bedroom. ‘Hey, see my new poster?’

I looked on the wall next to her Isaac Asimov poster; there was an enlarged laminated poster of a man. ‘Who is it?’

‘Bobby Fischer, perhaps the greatest chess player of all time.’
‘Wow. Is he still alive?’

‘I think so. But he stopped playing in tournaments. I wonder how he would have handled this mystery. It seems difficult to work it out because we don’t have all the facts.’

‘But perhaps we do, Jodie. We just don’t know if we have them all or not. It may be that we are just not using all the facts. It could be that there is something that we know, but we don’t consider it important.’
‘Like what?’

‘Hmm. I see what you mean. It’s a fact—but is it important? And how does it fit in? Karen, if only we could solve this puzzle before Friday afternoon, then we could tell the police and they would drop the charges. Surely, there’s some simple explanation?’

‘Like maybe the bank had some old money to be destroyed and they got it mixed up and gave it out to the customers.’

‘Sure, the trouble is it’s too hard to carry the body-boards on the bikes.’

I made a suggestion. ‘We could take the parcel carrier off my mother’s bike and put it on mine. Then we could sit the body-boards on the carrier and put a rope around them to hold them on.’

‘Sounds good. Now that it looks like we aren’t going to get a pool for years we’d better get used to riding the two kilometres to the beach.’

When we looked at the carrier, I wasn’t at all sure how to take if off or put it on my bike. I fiddled about trying to undo one of the bolts; at first the screwdriver didn’t fit, then it just turned and turned without coming undone. I stood up feeling frustrated. Jodie continued to peer at it, bent over the bike.
‘Maybe,’ I said, ‘we should ask your brother, Glen, to move it for us?’

She stood up straight and looked me in the eyes. ‘You mean because we are simple-minded girls we are not capable of moving the bike-carrier without a boy’s help?’

Jodie was right. It was silly to ask a boy after only one minute of trying to undo the bolts. It did make us into helpless girls if we went to a boy every time we had any trouble. Jodie was touchy on that subject because her mother gave up trying to do anything mechanical within five or six seconds! Even changing a light bulb or putting a hub cap on her car was far too much for Mrs Thomas.

We got some more tools out and soon realized that if Jodie turned the bolt with a screwdriver on one side and I held the nut with pliers so that it couldn’t turn, then it would easily undo. It was as simple as that. In ten minutes we had it bolted onto my bike. ‘Boys,’ she said triumphantly, ‘who needs ‘em!’

I tied the two body-boards on, collected poppers, sun screen, hats, and some bread rolls, and wearing our togs we set off for Jason’s Beach.

At the beach, which was quite crowded with school kids, a cool ocean breeze blew in from the east. We went for a dip taking the body-boards with us. We caught wave after wave, skimming in on the front of the white froth. This always gave me such a sense of exhilaration I would laugh aloud coming into the beach, speeding across the top of the water until my toes dragged in the wet sand.

After an hour we sat up on the grass under the shade of a huge Norfolk Island pine. We drank pineapple juice and ate cheese and tomato rolls.

‘What a perfect day!’ Jodie said.

‘Sure is. It’s great living on the coast, even if we don’t have a pool.’

‘Don’t remind me. It’s hard to believe something like this counterfeiting could happen in our town, let alone to my father!’

‘Here comes your boyfriend.’ I saw Ron Rocco with George Blare coming toward us. I knew he wasn’t her boyfriend, she didn’t have one, but although Rocco was always making a nuisance of himself, teasing her and was often quite rude, he did it because he liked her, not knowing how else to act. For her part Jodie usually found him rather a bore. George was a little more sensible, but he just seemed to follow along with whatever silly thing Rocco did.

Rocco sauntered up grinning, he had blue fluoro zinc across his nose.

‘I see you girls have been out in the sunlight.’

‘Uh. You tricked us. Of course I never really believed all that stuff about vampires and Darkson House.’

‘Of course you did,’ said George. ‘You were scared to death the night we went to look through the window.’

We were all smiling, that is until Rocco said: ‘I hear your father has been making counterfeit money. My dad reckons that’s why he could afford to buy a Volvo. Anyway, I just wanted to ask you if you could get me a couple of those fake one hundred dollar notes.’

‘You idiot, Rocco! Get out of here before I lose my temper.’

‘Hey, I just asked. Surely he could make me a couple? I want to buy a new bike. I see you got yourself a new carrier. You sure are lucky, just going and getting whatever you want from a stack of fake money. Your old man must be worth a mint. Get it? Just imagine, George, going and getting a handful—‘

‘What? Turn into a bat and fly away?’ He began laughing.

I tried to calm her. ‘Jodie, cool it. He’s trying to rile you up in his usual vulgar manner.’

‘And succeeding quite well!’ George Blare said. ‘Besides, it would be neat to have all that money, and I wondered if you could get me just a tiny—‘

I wanted to say something to help Jodie out. But I realized there was nothing to say. Ron Rocco was teasing her in his own insensitive way, not realizing that Jodie was truly worried, and that her father was in serious trouble. All he could see was the funny side of things, since none of it was happening to him. If we argued he’d get a kick out of that, no matter what we said. This seemed to be one of those situations where the best thing was to walk away without arguing. But how could I convince Jodie? She was ready to get into a heated argument with Rocco, which would only amuse him even more. I had to set the example and hope that she followed.
‘Come on Jodie, I’ll race you into the surf!’

I ran off leaving the others standing there. Ten seconds later Jodie was running alongside of me. I looked at her face and I wasn’t sure if she was near to tears or red-faced from sprinting.