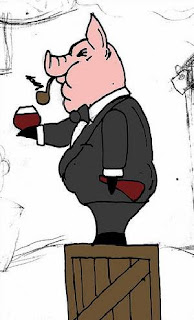 The day after the celebration of the battle, Boxer does not rest even if he has trouble with his hoof.

The animals are discussing about where to create a field for ‘old retired animals’ now. Boxer has still a year to work before retiring at the age of twelve.

Life is hard, the food is short and the temperatu­re is cold.

Squealer is always speaking about a readjustment of the ration of the food and of their improvement in the production.

“We are working hard“ the animals say.
“But you work for yourselves,” Squealer answers  “and you are free!”

Now there are thirty-one pigs more in the farm and Napoleon is their teacher. He is planning to build a school.

The new pigs can play in the garden, but not with the other animals.

In the same period new laws appears as a rule: the animals must stand a part when a pig is passing and the pigs can wear a green ribbon on Sundays.

The year is quite successful, but Animal Farm needs money for the oil, the candles, the machi­nery of the windmill, the bricks, the sand and other usual tools.

Rations are reduced again and again. Only the pigs are getting fatter and fatter.

One afternoon in late February the animals smell something new in the air coming from the kitchen, a smell of cooking barley.

But the beer is ONLY for the pigs.

In the same period Napoleon establishes ‘sponta­neous demonstrations’: once a week the animals must stop working. They meet and march in military formation.

In a long speech Squealer gives particulars about the production and the animals feel happy and free.

In Summer Moses, the raven, reappears in the farm after a long period of time and starts talking again about Sugarcandy Mountain, the animals’ paradise.

Boxer goes on working. He wants to rebuild the windmill.

But an unlucky evening a news comes to the farm: “Boxer has fallen!”

Clover stays near him and Squealer comes, called by the other animals

“Napoleon is very sad for Boxer. He orders Boxer is going to be cured in a hospital in Willington” Squealer announces.

The animals are surprised: no animal never leaves the farm.

For two days Boxer remains in its stall, then a van comes “to take him to hospital”.

All the animals crowd to say “goodbye” to Boxer. But when the van leaves Benjamin starts shouting: “Fools, fools. Look! It is the van of the knacker’s van”

The animals understand: Boxer is going to be killed. “Get out! Boxer, Get out!” they start crying.

The van disappears in the distance.

Three days later Squealer announces Boxer’s death. “ I was with him in the hospital…” he says. “Somebody thinks it was the knacker’s van…No, it is of the hospital now, before it was of the knacker’s”

On the following Sunday morning Napoleon appears in front of the animals.

“I am here to say a prayer for Boxer and to remember a sentence all of you must adopt: I will work harder.”

That night all the animals are silent, the only noises come from the Farmhouse….

Years are passing. Animals die. No one remembers about the old days of the rebellion, except Clover, Benjamin and Moses.

No animal retires now. They all work. Clover is quite fat and still works. Squealer and Napoleon are fatter, too. And Benjamin is just a bit greyer and more taciturn.

There are more young animals in the farm now: They are good animals, but stupid: they do not read and all of them  accept the rules of Animalism without understanding.

There are more pigs and more dogs…but they do not work. Squealer says that the pigs do an intellectual work and that the others cannot understand.

The Farm is prosperous and rich, but not the animals. They have not warm water and electricity. They have little food and work hard. But they still hope…

…till one day Squealer orders the sheep to follow him to the other side of the farm. He wants to teach them a new song.

And at the  very night, when the animals come back from their work, they hear Clover neighing furiously…they run and see…Squealer is walking on two legs! He is unsteady, funny, and carries a whip in his trotter. Soon after, other pigs follow, all of them on two legs ….the animals are terrified, amazed, they would like to protest but the sheep start bleating:

Clover looks at the wall where there are the seven commandments

“There is something different now, but my eyes are weak, I can’t read” she says

It is Benjamin who , at last, breaks his silence and read:

ALL ANIMALS ARE EQUAL

BUT SOME ANIMALS ARE MORE EQUAL THAN OTHERS.

From this moment on the pigs start carrying whips, using the telephone, wearing Mr. Jones old clothes and reading newspapers.

One evening the animals see a delegation coming to the farm: they are farmers from the neighbouring farm.
The animals are frightened and, in the evening they all go to the farmhouse, led by cCover. They try to look through the windows.

Pigs and men are laughing and speaking together .

Mr Pilkington is with a glass in his hand. He says he is satisfied of the new relationship with animal farm, he is pleased they are friends and proposes a toast: “To the prosperity of Animal Farm”.

It is now Napoleon’s turn. Usually his speeches are quite short and straight to the point.

He says he is pleased and happy of their friendship. He states there will be some changes: no Sunday meeting, no comrades, just a green flag without hoof and horn on it. But, more important ,the name of the farm will no longer be Animal Farm, but Manor Farm, as before the revolution.

“To the prosperity of Manor Farm” is Napoleon’s toast and  pigs and men  applaude and cheer Pigs and men.
The animals look at them surprise, terrified and shocked . Pigs and men. Looking into their faces while they are shouting and playing cards together they look from pig to man, from man to pig  Now it is impossible to distinguish them, to say which is which.