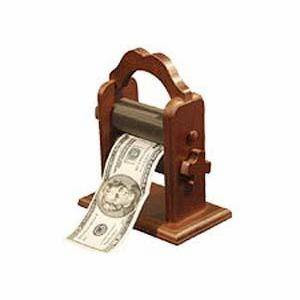 We rode our bikes in silence back to Jodie’s place. We were trying all the time to believe Mr Thomas was innocent—but every day he did something that made us suspicious, and that’s what hurt. We wanted to believe he was innocent, but he always created these doubts. When we arrived home, we found his car had gone. It must have been him at the shopping centre.

‘How could he,’ Jodie asked her mother, ‘go out when he had such a bad migraine? He did have a migraine didn’t he?’

‘I’m sure he did,’ she answered. ‘But remember Jodie he had to go to the police station today for the interview.’

We sat in Jodie’s room trying to figure out what it all meant. Why had Mr Thomas been at the bank dressed like he was robbing it—wearing dark glasses with a hat pulled down over his head?

As we sat out on the balcony discussing the counterfeit money mystery I could almost sense that something was happening in the back of my mind—intuition—like a faint breeze before a storm.

We sat about trying to read books. It was the hottest part of the day, even sitting in the shade was uncomfortably hot. My back, pressing up against the chair, had soaked sweat right through my T-shirt. Every now and then I could feel trickles of perspiration rolling down my side.

I could see Jodie was restless. She was trying to figure out the answer to the mystery but just couldn’t see how the pieces fitted together. She stood up. ‘Karen, let’s go back to that printer at Artwork.’
‘Why?’

‘Remember Mr Picard said he’d show us around the factory. I still suspect his son. He acted so suspiciously.’

‘But the police said the money was photocopied, not printed.’

‘Yes, but maybe if he’s a printer, he might know someone who has a colour photocopier.’

‘Jodie—maybe he knew your father!’

‘I hope not. I just hope whatever Dad has done it’s not illegal. Oh children are not supposed to have to worry about their parents. It’s supposed to be the other way around.’

We were dripping sweat when we arrived at Artwork Printers. Mr Picard was sitting in the same place behind his desk. ‘Come in kids. You want a look around? You didn’t bring your note books this time?’

‘No—um we just wanted to look about. We didn’t see much last time.’

‘Of course not. That lazy son of mine wouldn’t bother to sit up if he could lie down. Eric’s not here today. He’s out buying and selling cars and letting me do all the work.’
‘Does he ever buy cars at Coffs Harbour?’

‘Oh yes! Nearly every fortnight. He often goes down there or to Ballina buys a car and then sells it again the same day if he can get another few hundred dollars for it. He’s always trying to make an easy profit—without working.’

Mr Picard took us through the factory and explained about the photogravure machine and offset printers and … but we were hardly able to concentrate. Our minds were thinking over and over about his son buying and selling cars in Coffs Harbour.

Before we left, he asked us our names again. When Jodie told him she was Jodie Thomas he asked was she David Thomas’ daughter from Ruth Street.

‘No wonder I recognized you. Your dad works at Pacific Minerals doesn’t he?’

‘Certainly. My son handles quite a bit of printing for your father. They know each other quite well. It’s been nice talking to you girls, but I really must get back to work.’

We rode our bikes back in a heavy silence. The more we discovered the worse it looked for Mr Thomas. Even if he was truly innocent, it meant it would be hard to prove it.

But when Jodie’s dad came home there was a turning point—that’s when all the little pieces of the jigsaw puzzle began fitting into place.

Mr Thomas ran up the stairs and whirled Mrs Thomas around the room in a waltz. ‘Guess what! Guess what!’ Obviously his migraine had vanished.

‘Where? The police station of course.’

‘Why were you wearing a disguise?’

‘Disguise!’ He laughed. ‘You mean the sunglasses and hat?’

‘Yes, that’s a disguise, and a someone said you were the man who cheated them. What did you do at the bank?’

‘Not exactly Dad—but all these things—disguises, and the Artwork printer’s son and everything.’

‘What are you talking about?’ He sounded quite puzzled.

‘Everything! The disguise. The bank. Going to Coffs Harbour when the counterfeit money was passed. The printer’s son who buys cars in Coffs Harbour and then sells them the same day. Making a counterfeit note at work with the photocopier. Everything!’

‘I don’t understand you. I had dark glasses and a hat on because of my migraine, remember? I have to keep out of the bright sunlight or it gets worse. The reason I was in the bank was to transfer four thousand dollars from my account to pay for the lawyers.’

It had sounded suss at first, but now things made sense to me.
‘Mr Thomas, why did the man at the bank say you were the man who cheated them?’

Her dad sat down and put his hands up to his eyes. It seemed the migraine was coming back. ‘Ever since the newspaper article people have been blaming me for the counterfeit money. They say I did all sorts of things … a woman at the bank told me that it was people like me who caused the unemployment. When I heard that I felt very annoyed. I just had to get out of that bank as quickly as possible. I just can’t believe how stupid and suspicious some people are.’

Mrs Thomas said, ‘David, you were going to tell us something, remember?’ She was pouring out cups of hot tea.
‘Was I? Now what was—of course wonderful news—there’s been more counterfeit money passed!’
‘Oh no!’

‘Don’t you see? I was in the police station and they got a phone call from Murwillumbah police. A man called David Thomas, from Dayman Heads, had just purchased a second-hand car for six thousand dollars using counterfeit money. He fitted my description—but at the time he was buying the car I was at the police station! That proves to the police that I am not the counterfeiter!’

‘And another thing, I know how it all happened!’

‘When I sold the Falcon to Mr Swift, I accidentally left my driver’s licence in the glove box. Mr Swift found it and now uses it to “prove” that he is David Thomas. I remember now that he was the same height and weight as me. Very similar—and of course he had a good look at me so he would have found it easy to wear the same kind of clothes as I do.’
‘So then Swift must be the counterfeiter!’
‘What did the police say?’

‘Sergeant Snowden said he accepts that someone is impersonating me. That I am not the same person buying the cars with counterfeit money. I asked him would the police go ahead with the preliminary trial, he ummed and ahhed a bit then said he’d let me know tonight.’

Mr Thomas seemed to straighten up and began to smile. Jodie looked much happier. I was the only one who felt uneasy. I felt sure there was still a lot to explain. Where did the counterfeit money come from?

We all sat around for about an hour discussing the case and eating homemade scones and drinking cordial, except for Mr and Mrs Thomas who kept drinking hot cups of tea even though they complained about the heat. I was just about to go home when the phone rang. Everyone stopped as if a disaster was about to happen. Then suddenly, Mr Thomas rushed to the phone. He knocked over a pile of magazines and dropped the receiver before getting it to his ear.

‘Mr Thomas speaking.’ We couldn’t hear the voice on the other end, so it sounded strange just listening to Mr Thomas. ‘No trouble. Hello Sergeant. Yes. Yes. I understand. Well … wouldn’t I–?’ Then there was a long silence and although Mr Thomas said nothing we could all see that the weight, the fear, the worry and the migraine were all returning to him. ‘Um. Yes. I understand. Thanks f-for letting me know.’ And he slowly hung up the phone as if it were made of a very heavy metal.

‘At this stage they are still going ahead with the trial; a final decision will be made on Friday at five p.m. The Sergeant says he thinks I am still involved. My office has the only known colour photocopier in Dayman Heads. I admitted that I photocopied a one hundred-dollar note, and they also have a witness. And I was caught that first day right here in Dayman Heads trying to pass the counterfeit money at the swimming pool shop. Sergeant Snowden said he thinks I know more about the counterfeit money than I am saying.’
‘What about—‘

With that Mr Thomas went to the medicine cabinet, took out a packet of Panadol, a towel, and with a glass of water from the kitchen, headed for the bedroom clutching at his forehead.