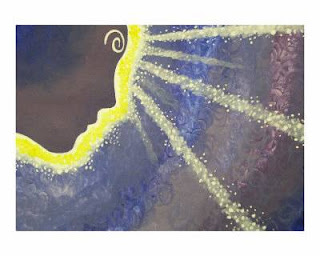 When I woke on the Friday morning, it was still hot and sticky, but out the window I could see black clouds gathering over the ocean. The clock showed 8:05, but I just lay there staring at the sky through the window. I was not really thinking about anything, just trying to keep my thoughts quiet. Sometimes when I do this I get what Mum says is intuition. It’s like a quick flash of light inside my head and suddenly I know the answer to a problem.

I thought that I’d had a lot of dreams during the night, but couldn’t quite remember what they were about. When I tried to remember them, they melted away; it was like trying to grab a handful of water. When Mum knocked on the door it was nearly nine o’clock. I turned and looked at her as I sat up in bed still wearing my pyjamas.

‘You’re not feeling sick or anything?’

‘No Mum. I’ve just … been thinking about the counterfeit money.’

As I was eating my second piece of toast, I experienced a moment of dizziness. I realized the dizziness was because all the answers to the counterfeiting had just flashed into my mind. It was amazing—incredible!

‘What’s the matter?’ She stood up staring at me.

‘The counterfeit money—I know who did it!

‘Then,’ she said smiling, ‘it’s probably intuition. That’s how intuition works—it tells you the answer in one quick jump. Now that you’ve got the answer you have to use logical thinking to go back and prove that your idea was correct.’
‘I’m certain. Why do I have to prove it?’

‘It’s good that you’re certain. But don’t tell anyone yet.’ She shook her head and poured a cup of tea. ‘If you do, theywill argue with you and try to prove you are wrong—you’ll get mixed up and stop believing in intuition, and then it will stop working. You know the answer, right?’

‘Now you must work it out step by step so that you can explain it, and prove it. If you tell people, “Oh my intuition worked this out” they’ll laugh at you. You’ve got to give them reasons. You understand?’

‘Yes. But I’m not sure how to work out the reasons.’

‘That can be hard because you’ve got to use a bit more intuition and then think logically to put the jigsaw puzzle together. What has happened is that your intuition showed you in one second the whole of the jigsaw picture, like it is on the cover of the box.’

‘But it didn’t show you which pieces fit where. The people who don’t use intuition are trying to assemble the jigsaw but don’t know what the finished picture looks like. Intuition gives you one quick glimpse of the finished jigsaw, then you have to put all the pieces together.’

‘Okay. I’ll just sit in my bedroom and think for a while.’

‘Karen, what are you doing?’

I wondered what I should answer. Jodie knew about my intuition because we were best friends. It was just that she didn’t always believe in it. Her father had taught her to use logical thinking. ‘Um … just thinking about the counterfeit money.’

‘Karen, my place is a disaster. Dad’s a mess. He’s been vomiting from the migraine. Mum’s fretting—she thinks the four thousand dollars won’t be enough for the lawyers if Dad has to go to court. And she keeps walking about the house talking to herself and saying they’ll have to sell the Volvo and maybe borrow money and she’s just about in tears, and she’s got the tea in her hand but is looking for it all over the house. And my brother Glen says he’s fed up with all of us because all we can do is whine about the counterfeit money while he has to live without the swimming pool. And he’s so embarrassed because he told all his mates, including some girl he’s trying to impress, that he was getting this huge pool. Now he says he’s lost face and she won’t talk to him and it’s all our fault. Oh, let me sit down.’

‘It’s starting to rain, Jodie. Look out the window.’

‘But it’ll be lots cooler.’ I felt good.

We sat in silence for a while, then she stood up impatiently. ‘We’ve got to figure out who it is! Karen, do you realize we only have six hours left to solve this mystery! At five o’clock this afternoon Sergeant Snowden will decide whether to go ahead with Dad’s trial or not.’ Jodie was looking nervous herself.

‘So if the police haven’t got any evidence that proves your dad is innocent by five o’clock Mr Thomas will have to go to court?’

‘Right. And then it starts costing us big money. The longer the trial, the more it costs. Mrs Manning told my mum that her sister went to court once about a fence between their house and next door. They won the case—but in the end they had to sell the house to pay for the lawyers because the bill was fifteen thousand dollars!’

‘You’re not talking much, Karen. What’s the matter—are you sick? Don’t tell me—you’ve got a headache?–oh that’s my luck everyone has gone loopy or got a migraine.’

She kept quiet for about two minutes then got up and walked about nervously. ‘This is getting us nowhere,’ she said. ‘We’ve got to go and see the printer’s son again. He knows something about the counterfeit money he’s not telling. I reckon—‘

‘Jodie, I know who the counterfeiter is, and I know how he’s been tricking everyone.’

‘What! You’re kidding aren’t you?’

Suddenly she was spinning about the room. ‘Let’s go down to the police—quickly! Get your raincoat. Why didn’t you tell me? Are you sure? Who is it? Come on let’s go!’

‘Wait! Sit down Jodie. It’s not that simple.’

‘But who is it? Tell me! Please tell me! It’s the printer’s son, Eric Picard, I’d bet anything on it! His father even said he buys and sells cars at Coffs Harbour. Is that who it is?’

‘Karen! We have,’ she looked at her watch, ‘five hours and fifty-five minutes left to convince the police my father is innocent. We’ve got to act!’

‘No, we’ve got to think! Remember what happened last time we went to the police? Just a few days ago we told them it was the printer’s son because he knew the amount was exactly seven thousand one hundred dollars?’

‘Yeah. And it was in the newspaper all along. You’re right I suppose. We’ve got to have all the answers this time or they’ll laugh at us. Well then tell me, I’m listening.’

‘Just listen a minute. My intuition showed me the whole picture, but it was just one quick flash. I’m not sure yet how all the parts of the puzzle fit together yet. If I start talking about it before I’m ready it will take longer. I’ve got to try and use logical thinking, okay?’
‘Sure. But are you certain you know who it is?’

‘I’ll bet you one hundred Mars bars it’s the printer’s son. Never mind, I’ll prove it. Let’s go down to Artwork and talk with—‘

‘Jodie wait! You’re slowing me down. I can’t think when you talk all the time. I expect that there’s no need to see the printer at all. But I do want to look in the street, and down at the bank.’
‘What for?’

‘Sometimes it gives me ideas. Let’s go now. Get your raincoat and I’ll meet you at the front of your house.’
‘Riding or walking?’

‘Let’s walk. That way I can explain things as we go along.’