BOOKS OF THE WEEK 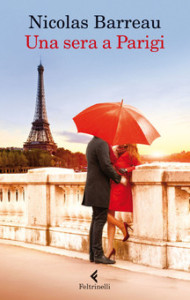 ONE EVENING IN PARIS by Nicolas Barreau
Paris. In a little corner in rue Bonaparte, near the Seine there is an enchanted place: Cinéma Paradis. The owner is Alain Bonnard, a nostalgic man with a passion for old films and, on Wednesday evenings, he always shows a retrospect of love films, Les amours au Paradis. He wants to show films that create dreams, and he likes the people that come to his cinema. He likes in particular an enchanting, shy girl in a red coat who turns up every Wednesday evening . She always sits in row 17 and always, as soon as lights are on in the old cinema, she disappears in the Parisian night, alone. Alan dreams of her and decides to invite her to dinner. The most tender of love stories is going to start when something happens and turns the life of the cinema – and of Alain – upside down: the Cinéma Paradis is going to be the location of Allan Woods’ new film Tender Memories of Paris. The American director’s favourite actress, Solène Avril, has known the cinema since childhood and wants the film to be shot there. Alains is enthusiastic to meet the fabulous and capricious Solène Avril , one of his iconic figures . Now the cinema is always full, he is praised for his idealism ….but where is the shy girl in the red coat? Has she vanished? Is it a coincidence? Alain sets off in search of the woman he has just fallen in love with …
THE AUTHOR – Nicolas Barreau was born in Paris in 1980, his father is French, his mother German. He studied Romance languages and literature at the Sorbonne and worked in a little bookshop on the Rive Gauche in Paris. Now he devotes his time to writing. His passions? Cooking and restaurants and he does not love to show himself in public. His novels are The Woman of My Dreams (2007), You’ll Find Me at the End of the World (2008), The ingredients of Love (1012) and One Evening in Paris (2013) 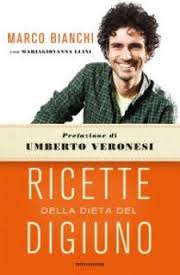 RICETTE DELLA DIETA DEL DIGIUNO by Marco Bianchi and Giovanna Gatti
Fasting is healthy and Professor Veronesi suggests not to eat one day a week and for some hours a day to keep fit and healthy. In this books Marco Bianchi – guided by the expert advice of scientist Giovanna Gatti – is trying to turn into tasty recipes the suggestions given by the famous Italian doctor . Some examples….whole wheat pennette with zucchini cooked in oil, garlic and parsley and hazelnuts; a velvet carrot sauce with thyme and almonds. As to cakes, a mixed berries plum cake. Tasty, energetic, without calories.
THE AUTHORS
Marco Bianchi, scientific popularizer, gives culinary advice which help to keep fit and healthy. Expert consultant of IEO and Umberto Veronesi Foundations, he likes cooking. His books include I Magnifici 20 (2010), Le ricette dei Magnifici 20 (2011), Un anno in cucina con Marco Bianchi (2012), Tesoro, salviamo i ragazzi! (2012), Il talismano del mangiar sano (2011) and I cibi che aiutano a crescere (con Lucilla Titta, 2013). He presented the reality «Tesoro, salviamo i ragazzi!» (My dear, save the children!) and the documentary films «In linea con Marco Bianchi» (On with Mario Bianchi) and «Aiuto, stiamo ingrassando!» (Help! We are getting fatter!)
MariaGiovanna Luini (pseudonym of  Giovanna Gatti), graduated in medicine with a specialization in radiotherapy, is a scientific popularizer at Oncology European Institute. She has published scientific books and contributes to TV shows and magazines. 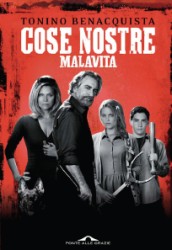 BADFELLAS (Malavita) by Tonino Benacquista
An American family, the Blakes, moves into a villa in Cholong-sur-Avre in Normandy. Fred Blake, the father, tells everybody he is an author who wants to write about the Allied landings. His wife devotes her time to charity, the children try to get on well with their schoolmates. The dog is called Malavita … and that says it all. But in the quiet town strange events start happening: a supermarket catches fire, a firm blows up… The truth is that the actual name of the family is Manzoni – Fred’s real name is Giovanni: he is an ex-Mafia boss now part of the FBI’s witness protection program. The story – quite violent – is saturated with black humour and witty dialogues. And the Blakes never stop shocking – and amusing – the readers.
THE AUTHOR – Tonino Benacquista (1961 – ) son of Italian immigrants, grew up in France. He soon stopped studying literature and cinema and was, in turn, pizzaiolo, museum night-watchman, and train guard on the Paris-Rome line. In mid eighties he published his first novel and has soon become an award-winning French crime fiction author, comics writer, and screenwriter. Among his bestselling novels are Holy Smoke (1991), Framed (2006), Bad Fellas (2008) and Bad Fellas Again (2009). In 2013 Bad Fellas was adapted into a film, titled The Family, directed by Luc Besson , starring Robert De Niro, Michelle Pfeiffer, Tommy Lee Jones.